At the Paris Salon of 1936 the presentation of the Fokker G-1 was a sensation and the public was very much impressed. This admiration is still present when warbird-enthusiasts  talk about this plane. The twin-engine Fokker G-1 had a double tail boom and a well curved gondola. No new concept, but the impression the plane made still lives on. 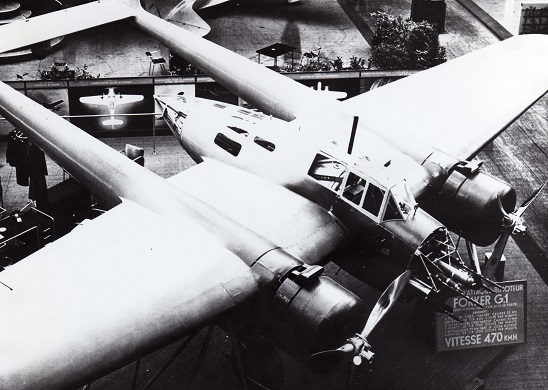 Even before it's first flight Fokker sent his G-1 to 1936 Paris Aviation-Salon. It was immediately nick-named. The French named the plane 'le Faucheur', meaning 'the mower'. The British gave the plane the name: 'Grim Reaper'. Both names refer to the impressive number of guns in the nose of the Fokker G-1.

The G-1 was designed as a heavy fighter with a crew consisting of a pilot and a gunner in the back. Several countries were interested. Orders were placed by Spain, Denmark and Sweden. Other countries like Finland, Estonia, France, Japan, Belgium, Poland, Turkey, Hungary, Russia and Switzerland showed their interest. The start of World War II prevented delivery of planes or even ordering the plane.

The 'Nederlandse Wapen der Militaire Luchtvaart (ML)' received a total number of 62 planes. Denmark had obtained a license and had just begun building 12 planes when the country was invaded by the Germans in April 1940.

All now known information about the Fokker G-1 is gathered by a group of enthosiast people. They combined the information from different sources to the best image possible.

Not only by this website we want to tell you about the plane, but also by our activities, our books part 1 and part 2 we like to tell you more.