Summer 1939, in a KLM contest I won a return flight Eelde-Schiphol. At Schiphol I was trained as an air gunner and I was glad to come back. The Douglas DC-2 brought me there in 45 minutes. I would maybe see the much talked about G-1? Not only I did, I also met test pilot Gerben Sonderman. I hoped to participate in a test flight . I knew Sonderman of Soesterberg and from Schiphol 1936. Especially in that last period we shared a special experience.

Soesterberg
It was New Year's Eve 1936: a splendid day. There was, to speak in language airforce, bread in the air. The JaVA was then very busy flying. But all that was not for me, I was on "duty".

That last remark gave me something to remember.... That is, after some flying I lost control completely. because, at some point I thought to fall out of the plane, we had no safetybelts, I held firmly with both hands and kept watching straight ahead. Masterfully one maneuver went into another. One moment with a roaring engine and the next moment with an engine that almost stopped. Pressed on your bench or as light as a feather. That day at Schiphol, I hoped to fly again with Sonderman. But now, with a G-1. The machine still in factory-colors, was ready for take off. Sonderman as a test pilot too. But joining him was unfortunately not possible. Although I was not on "duty" it was really impossible. Sonderman could not admit it. On a testflight no passengers allowed. Pity.

That day I met somebody else too. When boarding for the flight back with the DC-2, I spoke shortly with the pilot. Whether he could fly a little more south of the route. Then we would pass Blokzijl, my hometown. He did it. And that evening I could tell my father exactly which piece of land that day he was working on. The name of the pilot? Ton van Ulsen.

Abandoning
A good six months later we fly together again. But now not in a KLM airplane but in this much-discussed Fokker G-1. It has become mobilization-time. Overhead "foreign" aircraft are to be tracked down and attacked. Often these are the long patrol flights, sometimes shorter emergency flights. On one of the latter it happens. Our Fokker G-1 306 has a collision with the Fokker D.21 234 and gets severely damaged. Then we get into a predicament. Right fin and rudder are completely gone. We have to leave the plane but at first we could not do it. Finally, we succeed with the greatest difficulty. But then relieved we float using parachutes above the Dutch polders. Far below us our battered G-1 smashes to death. 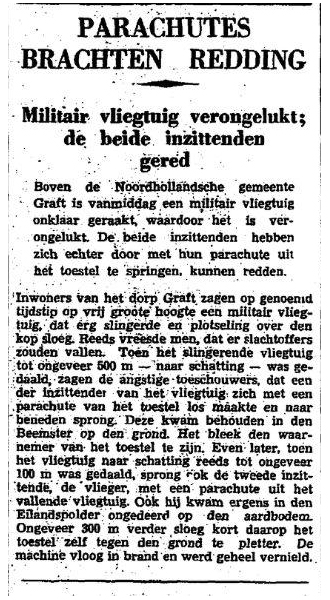